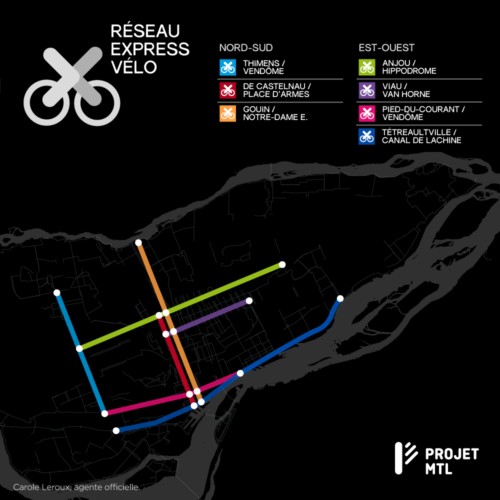 Every day in Montreal, we count 116,000 bicycle trips. Yet, cyclists can only count on few safe infrastructure. Over the past three months, four cyclists have lost their lives on the streets of Montreal. Valérie Plante, Projet Montréal leader and mayoral candidate, is committed to creating an Express Cycle Network (ECN) to provide Montrealers with safe cycling infrastructure. The ECN will lead to the creation of 140 kilometers of secured bike paths spread over 7 major axis for cycling traffic. This project is part of Projet Montréal's bicycle strategy, which aims to ensure the safety of all users, improve the existing network by creating missing cycling links, improve access to the downtown area and better serve isolated neighbourhoods.

"So many Montrealers would like to ride their bikes on a daily basis, but they do not dare to do so because the infrastructure is unsafe and they fear for their lives. Montreal’s bike network was built in the 1980s and is no longer adapted to our reality. New infrastructure needs to be built to meet the needs of today's cyclists. I travel by bike every day and I see how many problems there are and how great the need is. With my team, which has an unrivaled experience in cycling issues, I will be able to offer a safe, efficient cycling network worthy of the best cycling cities.” - Valérie Plante, Projet Montréal leader and Montreal mayoral candidate

"The current administration never took cycling issues seriously and was content, for four years, to merely paint lines on pavement worn with potholes. Montrealers deserve better than a stagnant network that does not favour the safety of its users. By implementing the Express Cycle Network, we will address an urgent need to secure a busy network that is used every day by tens of thousands of cyclists. It is an emergency plan that will of course have to be further developed and enhanced.” - Marianne Giguère, Projet Montréal spokesperson for cycling issues and city councillor candidate in De Lorimier district