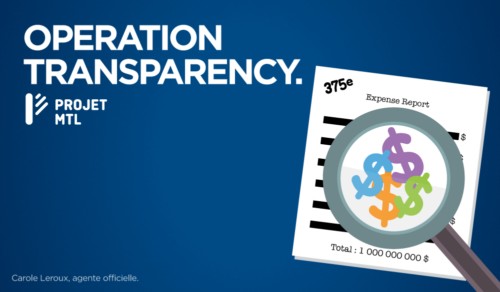 Expenditures on Montréal's 375th anniversary celebrations reached $1 billion. On its own, the Société du 375e had a budget of $125 million of public money, from the City of Montreal and the governments of Quebec and Canada. Despite the substantial amount allocated, Montrealers have never known how their money was spent as the Société du 375e, a non-profit organization (NPO), is not subject to the access to information act. Valérie Plante, head of Projet Montréal and aspiring mayor of Montréal, wants to shed some light on the money spent by the Société du 375e and, soon after the election, promises to adopt a policy to oblige all NPOs who do business with the City to make their annual reports public. In doing so, Valérie Plante will put an end to the culture of secrecy surrounding NPOs.

"Montreal’s 375th cost $ 1 billion. We have seen a real spending spree. However, several of these expenses, especially those managed by the Société du 375e, were carried out with zero transparency. Montrealers have never known how their tax money was spent or whether it was worth it. It is time to shed some light on the activities of the Société du 375e. The secrecy has gone on long enough. Montrealers have a right to know how their money is spent.” - Valérie Plante, Head of Projet Montréal and aspiring Mayor of Montréal

"It is worrying that the City of Montreal does not have any monitoring mechanism to monitor major projects such as those carried out under the 375th. Fortunately, with Valérie Plante as Mayor, Montréal will finally have an Accountability Commission that will be able to follow-up major projects and make accountable the people who are responsible for them.” - Sue Montgomery, Mayor of Côte-des-Neiges-Notre-Dame-de-Grâce