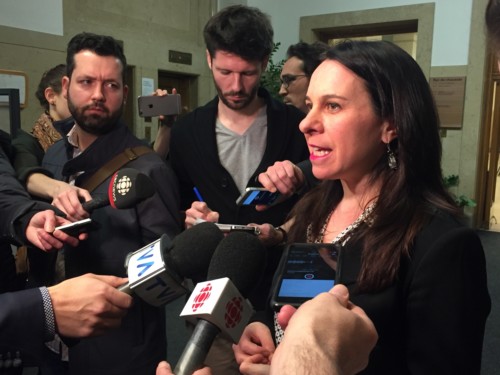 Montreal, Monday 3 April 2017 – Projet Montréal demands that mayor Denis Coderre be totally transparent and reveal all the information surrounding the personal cheque for $25 000 that he received from businessman Jean Rizzuto in 2012, and which he never declared to the Ethics Commissioner. “Denis Coderre was a federal Member of Parliament at the time and he flippantly ignored federal law by accepting a $25 000 donation without declaring it. As an elected official, Mr. Coderre must act according to the highest ethical standards. He must shed all the light on this gift, which UPAC and the RCMP have deemed worthy of investigation”, said Valérie Plante, Leader of the Official Opposition.

Projet Montréal is asking mayor Coderre to make three documents public: the $25 000 cheque he received from Jean Rizzuto, the invoice from Fasken Martineau for the legal fees that this cheque was supposedly intended to cover, and the out-of-court settlement that he signed with Shane Doan in 2010 in order to put an end to their legal proceedings. “Mayor Coderre owes Montrealers some explanations. As MP, he accepted a cheque to help his defence in a cause that was entirely his own creation, while he was a member of the government in 2005. The controversy is that a federal MP received $25 000 from a businessman without declaring it. This really looks like an illegal contribution, made in violation of federal rules and regulations”, added Valérie Plante.

Finally, the Official Opposition is shocked that mayor Coderre tried to deny the existence of this cheque from Jean Rizzuto. Indeed, as revealed this morning by the Journal de Montréal, the mayor first denied having received the cheque, when questioned on the subject three weeks ago. “The mayor lied in an attempt to minimize the scope of this event. This is totally unacceptable on the part of the mayor and shows that a lot of work still needs to be done to clean up politics at City Hall”, concluded Valérie Plante.