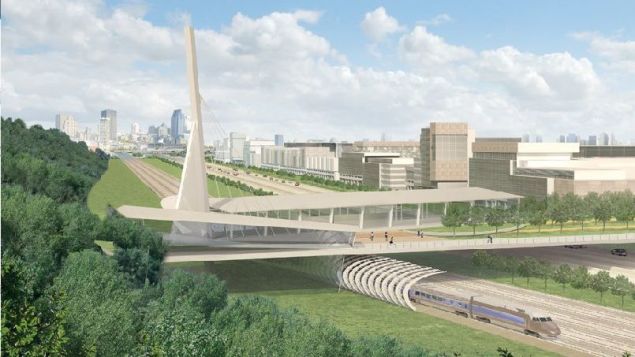 Montreal, Tuesday 21 March 2017 – Projet Montréal added its voice today to that of a coalition calling for the immediate return of the cyclist and pedestrian overpass initially planned for in the Turcot interchange reconstruction program. The wide green overpass, known as a “dalle-parc”, was meant to provide a safe connection between the St. Jacques Escarpment and the LachineCanal area.

”None of the successive Transport ministers ever took responsibility for the green overpass having disappeared from the new Turcot plans – all they ever did was pass the buck. But at the end of the day, nothing was done to make sure the overpass remained in the final project plans. Today, we ask Minister Laurent Lessard to show leadership and to ensure Montrealers that the overpass will be built, as initially planned”, said Craig Sauvé, transportation spokesperson for the Official Opposition.

Last November, Mr. Lessard indicated his intention to correct the situation. Projet Montréal regrets that no action has been taken since to reintegrate the slab in the Turcot project. “This is more than just an overpass that would avoid long detours for Montrealers. It would also offer them a safe solution for crossing the Turcot interchange. It would connect NDG with the Sud-Ouest and Lachine boroughs. It would constitute the only pedestrian and bicycle-friendly infrastructure serving local communities in the entire Turcot project. Without it, the interchange will continue to be an insurmountable barrier for active transportation in the area”, deplored Peter McQueen, city councillor for Notre-Dame-de-Grâce.

Projet Montréal recalls that all major urban infrastructure projects must account for public and active transportation users. “Transport Quebec has admitted that the green overpass was removed from the project because of its costs. But it represents a mere 1% of the $4-billion Turcot project. The ministry is sending the message to pedestrians and cyclists in NDG and the Sud-Ouest that if you want to go from one neighbourhood to the other, well, take your car. In 2017, investments in safe transportation for everyone can’t be optional – they must be the norm”, concluded Craig Sauvé.